When the UTF-8 validation algorithm is used to check the encoding of English email content, 1705 comparisons are required, as shown in the following figure. 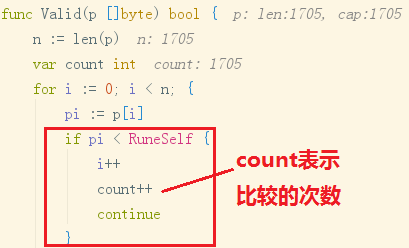 Therefore, in a scenario where a large amount of ASCII encoded data needs to be validated, the UTF-8 coding validation algorithm before optimization uses the single-character comparison to check the encoding until the entire data is checked cyclically. The algorithm execution is time-consuming, and the performance needs to be improved.

To improve the UTF-8 validation algorithm, parallel programming can be applied to check multiple ASCII encoded characters at a time, reducing the number of comparison times, accelerating the validation, and improving the algorithm performance. The UTF-8 validation algorithm of the Go language uses the algorithm optimization solution based on the parallel programming idea. Eight ASCII encoded characters can be checked at a time, greatly improving the performance. The following figure shows the code comparison before and after the algorithm optimization.

The optimized code is analyzed as follows: The assembly code after optimization is as follows: According to the analysis, before the optimization, one unit8 variable is used to store data for encoding validation. Corresponding to the assembly code, the MOVBU instruction is used to obtain one byte of data to the register R4, and the encoding of one-byte data is validated at a time. In the optimized code, two unit32 variables are used to store data for encoding validation. In the corresponding assembly code, the MOVWU instruction is used to obtain a piece of W (4 bytes) data to registers R3 and R4, respectively, and the encoding of 8-byte data is validated at a time. This optimization method increases the amount of data stored in the register in the assembly instruction by using more unit32 variable types for storing data in the Go language code, and implements parallel validation of more encoded data during the register comparison operation.

According to the performance test result, after the UTF-8 encoding validation algorithm is optimized, the average time consumed for validating ASCII encoding is reduced, and the performance is improved by up to 49%.