[Helsinki, Finland, January 9, 2015]: Ukko Networks, a mobile data operator in Finland, announced the successful completion of a TDD LTE-A demonstration in their Helsinki lab based on a 2.6GHz band. The demonstration showed a peak throughput of over 507Mbps, which is currently the fastest in Europe.

The event included a demonstration of throughput of 507Mbps with a 2*20Mhz carrier aggregation, as well as several application services such as a video surveillance solution, which will develop the enterprise market using the TDD spectrum. Moreover, Huawei showcased its Mate7 smart phone which is capable of handling a throughput of 200Mbps . Ukko Networks also showed this cutting edge technology to their own customers.

Last month, Ukko Networks launched the world’s first LTE 450MHz network in Finland. The network covers an astounding 99.98% of the country’s population, effectively providing the largest LTE coverage in Finland. Moreover, Ukko Networks also plans to utilize the 50MHz LTE TDD frequency resource on the 2.6GHz band. Along with LTE-A technology, like CA and 4*4 MIMO, the LTE TDD network can provide a peak throughput of 507Mbps to a single user. By using a 450MHz and 2.6GHz LTE network, Ukko Networks will provide the widest LTE coverage and highest LTE throughput of any LTE network in Europe.

During the 2014 MBB Forum recently held in Shanghai, Ukko Networks had signed a Letter of Intent (LOI) with Huawei. As a strategic partner of Ukko Networks, Huawei is to provide end-to-end LTE TDD solutions, not only with regards to facilitating the smooth migration of WiMAX to LTE TDD, but also in re-using network resources such as base stations, existing sites, power supply, and antennas. This initiative will represent significant investment savings for Ukko Networks.

As for the construction of the LTE 450MHz network, Huawei also provided the SingleRAN solution which enabled the smooth transition from its existing CDMA 450MHz network to LTE. This enabled Ukko Networks’ LTE network to cover 99.98% of the country’s population within only 5 months. 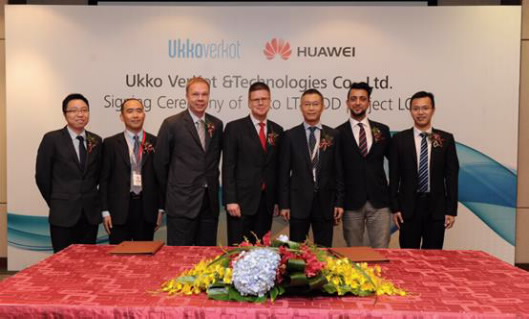 "Ukko Networks is clearly in a great position in the Finnish mobile market landscape, especially from a frequency resources point of view. After launching the best coverage network using LTE 450MHz technology, we will launch the LTE TDD 2.6GHz network, which aims to be the fastest network in Europe. It gives us high capacity and new added-value for this frequency in the use of mobile data. " said Antti Pellinen, CEO of Ukko Networks.

"As a strategic partner, Huawei not only provides end to end solutions to help Ukko Networks be the best in Finland’s mobile market, but also allows them to reduce their TCO and Opex, ultimately achieving business success in Finland’s telecom market." Said Mr. Yang Ge, Vice President of Huawei LTE TDD Product Line.